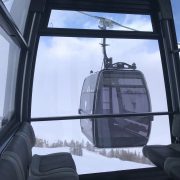 The Télécabine de La Daille has just opened. It is fast, comfortable and silent, with smart leather seats. Queues at La Daille are a thing of the past! 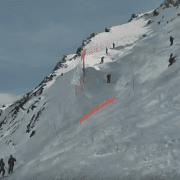 Do you remember the 3000 poma? The short, steep drag-lift that served a short, steep piste on Solaise and, through a tunnel in the rocks, an even shorter, steeper piste on Le Fornet? Well, after a seven-year hiatus it is back in action this year. Reckon you’re a good skier? This is the place to prove it!

Good-bye to bottlenecks at La Daille: the new bubble has ten seats and goes like a rocket! 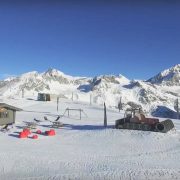 In spite of Val d’Isère’s reputation as the ultimate resort for hairy-chested adrenaline junkies, it has always looked after children well, and le ValKids, the area at the top of the Solaise lifts, is not just Val d’Isère’s third nursery slope (after la Daille and the village centre), but a complete zone for 4-10 year-olds. As well as the magic carpet lifts and ideal little slopes, there is a model Ratrak, toy lifts, a snow-making demonstrator and pisteurs on hand to show how they rescue people. Le Lounge, just above, has cartoons for children, the cheapest snacks in Val d’Isère, tables for your packed lunch and loos like the Burj al Arab! It is all rather surprising, but the strangest thing is that nobody seems to know about it yet… 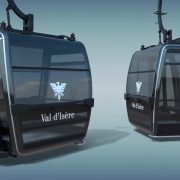 This is a 10-seater cabin from the new Pininfarina bubble lift that can carry three times as many skiers every hour at twice the speed as the old La Daille bubble, and in much greater comfort, with tinted glass and warm bottoms! The top station is just above the Folie Douce, roughly where the old chairlift used to arrive. Party animals need not worry about how they’ll reach it after a big session at the Folie Douce: there is an escalator! 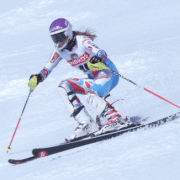 Following the record snowfalls this winter, there are still vast amounts of deep snow on the slopes around Val d’Isère and even on the roofs at village level. Indeed, the road service in Val d’Isère now doubts whether it will be able to cut through the 15m drifts to open the road to Europe’s highest col for the summer skiing in early June. So the plan at the moment is for the French ski teams to practise on the OK piste, at the top of Bellevarde, until the road opens – for the first time in living memory. 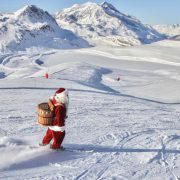 Merry Christmas!!!!
Chris and I were the only ones working today as everyone else was enjoying Christmas with their families. I had a wonderful ‘Christmas’ ski with Millie, Red Ray, Penny and Michael and we skied beautifully prepared and empty pistes en-route to the Sachette. The Sachette was great ambience as we ‘sniffed’ about for various types and strips of good snow to get us to the bottom. Much has been ravaged by the wind over the past 36-to-48-hours and the Sache area is no exception, but there are workable routes down, which is significantly better than no workable routes down! (See photos)

I kicked out a little slab this morning, which certainly got Millie’s attention, and Penny commented, “well reacted Wayne” after I skied out to the side. We haven’t had any new snow to speak of but with the ferocious winds some snow has been transported in the wind and the Tignes area certainly has a more ‘hollow’ feeling underfoot compared to the Val d’Isere-side of the resort.

Gill and Katie have been skiing with Michele’s son Cassius the past couple of days and they’ve had a great time together. Michele is unfortunately out of action after breaking her ankle this summer in Spain.

We’re getting ready for presents now so enjoy the rest of your Christmas and stay tuned for more news tomorrow! 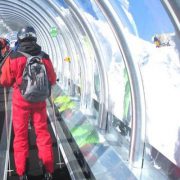 By Henry Druce in the Daily Telegraph, 15 December 2016

There has been a song and dance about the developments in the Solaise area of Val d’Isère. Indeed the judges at the 2016 Telegraph Ski and Snowboard World Snow Awards were so impressed with the plans for a new gondola, day lodge and covered magic carpets serving a dedicated beginners’ area that Val d’Isere won a double accolade – European Ski Resort of the Year and Ski Resort of the Year.

However, it is one thing making a judgment on what is planned, another to see how the plans have come to fruition.

On the 10-person gondola you can take your skis or snowboards inside or put them in the external baskets. From first sight, the new 10-person gondola – there are 91 cabins in total – is a sleek beast. Its all-black exterior and tinted windows makes it well suited to a supporting role in a James Bond film. It replaces the old Solaise Express quad chairlift – which, with more than a million people using it last season, was the third most used lift in the resort – and the even older, but less-used, 48 person Solaise gondola, originally built in 1942. The new lift can take 40 per cent more people up the mountain than the Solaise Express chairlift, translating to an impressive 3,600 people per hour.

It follows hot on the heels of a new state of the art lift opening in Sölden in the Tirol region and four new lifts linking the St Anton and Lech ski areas.

The interior of the gondola follows the dark theme, with black padded seats. It all feels very luxurious and that impression is confirmed as the heated seats gently warm your posterior.

The seven-minute ride from top to bottom gives little opportunity to make the most of the free Wi-Fi but more than enough time to enjoy a bird’s eye view of Val d’Isère’s iconic run black run, La Face. The views on Sunday 11 December were especially impressive, as it was the third day of the Première Neige, so in the morning we saw some of the world’s finest racers tearing down the improbably steep run in the men’s slalom and women’s Super-G events.

Two of the 91 cabins give a further scenic thrill as they have transparent floors. It’s not comparable with the Peak to Peak gondola in Whistler-Blackcomb where the views from selected cabins are to the valley floor a mile below. On the new Val d’Isère lift you’re rarely more 10m from the slopes but it still adds a visual frisson.

While the new gondola starts where the Solaise Express Chairlift did, its final destination is 200m further up the mountain. This is much more convenient, allowing easy access down to the main Solaise chairlifts. Previously getting there meant the faff of skating along a flat section of piste or catching another chairlift.

At the top of the lift is the real revelation of Val d’Isère’s €16m, two-year investment programme – a North American style day lodge, with a French/Euro twist. Its North American counterparts tend to be large, functional affairs with fast-food restaurants, locker rooms and places where you can eat your own food. The Val d’Isère version, Le Lodge, is a smaller, smarter affair made of stone and with giant windows and panoramic views of the Solaise ski area.

Crucially it offers an outdoor and indoor space for picnicking. In the outdoor space bean bags are scattered around invitingly and inside there are basic tables, chairs, a smattering of comfy chairs and sofas, vending machines for snacks and drinks and – joy of joys – a microwave oven.

There’s a small café where you can buy hot drinks and pasteries at very un Val d’Isère prices. This is most probably the only place on the slopes where you can get an expresso and croissant for the grand total of €2.50. The mix of stone, wood and glass makes Le Lodge an attraction addition to the slopes

Val d’Isère has a reputation for pricey on-slope fare so this is truly a welcome addition for anyone wishing to limit their lunchtime expense bill or take a pitstop without breaking the bank. It’s also unusual in Europe for a resort to embrace picknickers, especially a destination renowned as one of the world’s best.

Other inviting features of Le Lodge include table football and a dedicated Kids Corner for young children, with rows of seats in front of a widescreen TV showing cartoons. It’s likely to prove an invaluable tool to keep young children stimulated during breaks from the slopes, so long as it doesn’t prove so alluring they don’t want to go back.

There’s also a loo with a spectacular view.

The only downside of Le Lounge is that it’s likely to prove very popular, and as the inside space is fairly limited it might struggle to meet demand, especially at the height of the season.

The Lounge is positioned just above a new beginner area and learning slope including a little slalom, served by three covered magic carpets that look like giant silkworms. There were few beginners trying out these slopes this early in the season but it was easy to appreciate how much they would enjoy the gentle, wide pistes, the covered magic carpets and regular pitstops at Le Lounge. The high elevation (2,500m) is another major plus, giving beginners a real sense of being in the mountains rather than learning, as is often the case, at resort level.

A new lift pass covers the Solaise beginner area as well as a substantial amount of terrain suited to more accomplished skiers and snowboarders. The special €35 day pass includes the two village lifts of Legettaz and Rogoney, the Solaise gondola, and the three magic carpets as well as the Madeleine, Datcha, and Glacier chairs.

This focus on beginners is significant for Val d’Isère as it’s always been renowned for its excellent and extensive terrain for intermediates and experts but not catering so well for first timers. The new developments knock that view on the head. 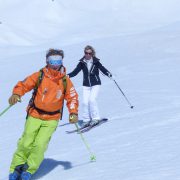 The new development at the top of Solaise – one of the largest projects ever undertaken by the resort – is underway. This summer 70,000 cubic metres of earth were moved to make way for the new 10-person gondala which will replace the current chairlift. There is to be a covered magic carpet for the new beginners’ area and a tubing (toboggan) arena.

The whole project has been done with regard to the environment with just 16 pylons replacing the current 34. For any tree cut down, five others have been planted while other plants have been relocated.

The machinery for the base station will be underground, reducing noise on the surrounding nursery slopes.