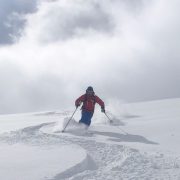 Val d’Isère’s discreet twin, Bonneval-sur-Arc, the tiny resort at 1800m on the other side of the Col de l’Iseran, has applied for permission to build a single lift right up to the Pissaillas Glacier, linking with Val d’Isère’s lifts. This would add considerable piste and off-piste skiing to the Espace Killy, in exchange for adding a relatively small number of beds to the total number already in the area.

At the moment, this is a vast off-piste domain, and you have to come back from the Bonneval side by helicopter. We don’t think the National Parks will allow it, but either way the slopes dropping 1500m into the Maurienne Valley are something every skier or boarder should do at least once in his or her life! The whole Fornet secteur has undergone a facelift – not the actual lifts or pistes but the lift signs and the new-look cable-car station itself.

The tricky boulder-strewn bottleneck on the Table d’Orientation piste at the top of the Laisinant Express chairlift has had some of the nastier bits smoothed off, which should make it less treacherous though no less steep.

Speaking of steep, the Joseray piste on the Face de Bellevarde has also been widened in its mid-section, mostly for the safety of downhill racers, but also for the appreciation of everyday skiers. It gives an extra choice of routes down the Face, having opened up a swooping new corridor past the bottom of the Loyes Express chair and on down the Face.

Until recently, the plan was to take away the Loyes Express, the upper rapid detachable on the Face. This would have meant that you couldn’t just ski the upper half of the Face (which is the nicer half, especially at the beginning and end of the season). More annoyingly, it would have made the Olympique mega-bubble the only way up Bellevarde from the village centre, which would have been a shame in high season.

Knowing that YSE brings a lot of regular customers to Val d’Isère, various locals said that we should try to influence the lift company to leave the Loyes Express in place. So we told everyone who would listen (the mayor, the head of the STVI, the head of the tourist office, the priest etc), and quite a few people who wouldn’t, that this lift was essential to our continued existence! We don’t know whether anyone took any notice, but the Loyes Express is still there.. though probably only for one more winter.

Famously freezing and seriously unpleasant in bad weather, the old clockwork chairlift up the Fontaine Froide has been replaced by a new, comfy, rapid detachable 6-seater chair. This makes the cruisy green triangle of the Verte, Génépi and Grand Pré even more enjoyable this winter.

The new chairlift will deposit skiers between the top of the Olympique and the top of the Funival. The whole area between these three busy landing points and the Bellevarde restaurant just below has been re-landscaped to make it much more gentle, and to stop the bottlenecks that have often caused difficulties, especially to less confident skiers.

It provides an easy link from those runs at the ‘back’ of Bellevarde with the La Daille side, and gives much quicker access back to Val d’Isère centre via the Face or the Olympique bubble. 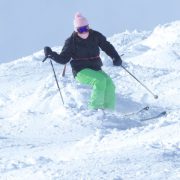 Where the off-piste Tommeuses bumps used to be is now a new run called Les Rocs. Maintained (ie no rocks, despite the name) but not bashed nightly, it’s short and sharp and fun, if you’re into that sort of thing.